Could it be? Detente? Yes, it appears so.

A kind of peace, at the very least, brought upon by the discovery of something unexpected: my wife found an old photograph, and a website she’d not seen before, or wanted to see.

And this is the photograph: 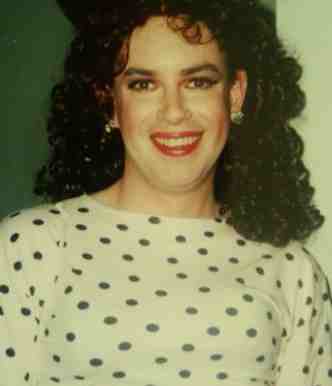 Searching for old pictures of our niece for her graduation, my wife stumbled upon this picture taken the same year the girl was born, 18 years ago. It was 1994, and I dressed-up for Halloween.

It was the first time since I was a teenager that I wore women’s clothing and makeup. My friends were stunned, especially the young woman I was dating. Someone who didn’t know me commented that it didn’t truly resemble a costume, and asked if I did this all the time. The answer was no, but it was strange to discover after nearly 15 years of male hormones coursing through my body, I could still pass.

I never thought about that experience again, until the changes started more than a decade later. It was 2005, and I showed my wife this photograph and others from that party, in a discussion of what was happening to me.

Another seven years later, it’s the present: my beloved rediscovered these pictures, not recalling at first that I had showed them to her. There was suspicion at first, and when I answered truthfully and without evasion, she then considered the significance of the timing; she married me just two years after that Halloween party, never knowing about my buried past. It wasn’t something I kept from her as much as I kept it from myself, something to be forgotten along with old girlfriends’ phone numbers and dating disasters.

If there was a connection between my modeling days, that party costume and the changes I have experienced, I hadn’t considered it before. But she did now. This discovery, and what she learned from the APA website about transsexualism, truly opened her eyes more than anything I could have said. She realized who I really am.

I’m not saying she was no longer broken-hearted, but at least we both felt as though we could go forward as allies, instead of enemies.

My wife’s one demand: she considered it imperative that I accepted a fact of life. That instead of seeing myself as a heterosexual male with a transgender condition, she wanted me to “own” that I am in fact a transgender female and a lesbian. No more hiding.

I was a little taken aback. I told her I wasn’t ready to move THAT fast! I really have no idea what it’s like to have a totally supportive spouse; I imagined it would take some getting used to.

So what was to happen now? I reminded her that my feelings for her hadn’t changed; that if she had feelings for me, too, I could survive as a “non-op” (someone who chooses not to have surgery to transition from one gender to another). Pulling my iPhone from its dock in the total darkness, I showed her a website:

She didn’t have her glasses on, since we were in bed, together. So, as we cuddled next to one another in front of the tiny illuminated screen, I read it aloud, in particular the part about MtF’s who choose to not have surgery so they can stay with their wives and children. There was silence when I finished.

A moment passed, and I could sense a relaxation in her tense, naked body, as she lay so close to mine I could feel her breathing.

And that’s when she attacked me. Kissed me full-on, right on the lips… and the rest I’ll leave to your imagination.

I should note, my transformed body can only do so much without medical assistance, and with a sufficient interval to allow a certain prescription to work. So, don’t jump to conclusions as to what went on, but know this: it was great, for both of us.

I think we’re on the road to somewhere. Hopefully, together, for at least awhile longer.

And I think I’ll hold-off on that whole idea of “owning” anything and just live in this moment, for now.