STOP. Just for a moment, before scrolling ahead, think of the word or phrase that irritates you most. Got it? Okay, let me guess. Was yours…

Perhaps none of those words offends you, or gets your Irish up, as my grandmother from County Leitrim used to say.

Before I tell you mine, I must admit: I’m tired of being audited, I detest the ubiquitous overuse of “breaking news,” I won’t discuss politics here (at this time), I am not a fan of the “T” word and I am careful to avoid using “sweetheart” or “hon” with anyone unless I know them well enough — or they do so first, I thought we enacted religious freedom in 1789 and as much as I know I should, I hate flossing. Lastly, my spouse has a love/hate relationship with the moniker “Mom;” she had threatened to change her name to “Fred,” until a) her mother married a man named “Fred” and b) I changed my name to “Dawn” and she didn’t want people to think she, also, had gender dysphoria.

Which brings me to my most hated, despised and just all around annoying string of words:

If you don’t know me or my story, I encourage you to read earlier entries of this, my blog, so as not to put the rest of our friends to sleep from having to hear it yet again.

But there has never been ONE TIME that someone hasn’t used the phrase “back and forth” to describe my transition when it is being discussed. For a time, I thought I should print up tee shirts with the words “Dawn is Back” on the front, “And Forth” on the back, just to make some money off the damn spectacle of it all.

Some have suggested that instead of “Life After Dawn” I should call my story “Back and Forth,” since it seems so top of mind. “And why isn’t it ‘Life After Don,’ anyway?’ they ask.

Sigh. “Back and forth” bugs the hell out of me (I think I’ve made that point sufficiently clear, no?) because it focuses attention on my so-called “failure,” my confusion and perplexing inability to maintain my gender transition in one direction.

“Newsman Changed Gender Three Times” screamed the headlines, back in the day.

Before you say, “Now, wait a minute! Yes, you did…I remember! You even blogged about it. And besides, it’s on Google!” please allow me to explain.

I know just as well as you do what was reported, and yes, some of it was based on an ill-advised email I sent to “trusted” colleagues.

Here is the message that matters, and why I’m writing this:

I was assigned male at birth in 1964… circumcised (twice)… given a male name… raised as a boy and loved by my parents and sister, who — for the first two years of her life, could not say my name and so she called me what she knew I was:

To me at age five and six, being called “Boy” was just about as awkward (but cute) as my kids calling me, their transgender parent, “Dad” as I exit the ladies room (not cute, potentially dangerous and if some people get their way, likely to get me incarcerated).

We’ll need to chat about that, I think, although I am on record as supporting their decision to continue to call me “Dad.”

But “Boy?” I spent a lot of time trying to get this little cherub to call me my proper name. And here we are, 45 years later, and guess what? I still can’t get her to call me by my proper name!

My sister, like so many others, cannot understand why I transitioned, why I did it so publicly — announcing it on facebook! The nerve! Why, people will SEE IT, and — they’ll know!

Thousands, perhaps tens of thousands of transgender people post stuff on facebook about their transitions. The difference is, they don’t work at a major TV network and have a book publisher with an agenda to ruin them and their plans for the future.

And maybe a few hundred of those possible tens of thousands may encounter difficulty in their transition; I don’t have reliable numbers, sadly. Nobody really knows how many people are trans, or how many people detransition. We are told very few, mainly because psychological and pharmaceutical guidance keeps people from going too far if they’re not prepared. Some chafe at the gatekeepers’ rules, others complain they don’t do enough.

Mine did their job well, and only one therapist failed me, just when I needed her most, when my career and livelihood were on the line.

She and a lot of people have said that phrase, “back and forth,” and I do understand why.

I’m thinking maybe I’ll change it to “Shlomo” for the next go-round, just for laughs.

STOP. There is no next go-round. And what brings me to write about this is, I don’t see the back and forth everyone else does.

I’ve been doing a lot of meditating lately, thanks to the help of my dearest friend, Susan, and it’s helped me unlock some memories which I think connect the dots, from my early childhood to now, to help me better understand my gender transition.

That child raised and even called “Boy” — that’s me, remember? I do. I was hyperactive, imaginative, friendly, adventurous, uncoordinated, artistic and all-American looking — enough to be cast in commercials and print advertisements, starting at age four.

Slender, expressive, sensitive, emotional, intensely loyal and more interested in playing house with Marilyn Ciaccio across the street than cops and robbers with my best friend Tommy McCoy and the Quinlans. I recall wanting to be an astronaut race car driver who gave it all up to get married and have five children. I remember being saddened to

learn only women could be mommies and that priests were not allowed to marry.

I loved watching “Batman” on TV, but my favorite character was Catwoman, played by Lee Meriwether.

And a month before I was to turn six, I remember my parents and I watched one of our favorite TV shows together: “Mission Impossible.”

It was February of 1970, and Barry Williams of “The Brady Bunch” was the guest star. He played an Eastern European King who had to go into hiding to escape assassination… and Jim Phelps and his tireless IMF team disguised the boy king… as a girl.

Also in the 1970’s, Scooby Doo and Shaggy were running from the usual monsters, and — plot twist — they disguised themselves as women to try to escape.

In my teens, I was haunted by nightmares that my parents had left the department store without me — again, this was the 1970’s, when kids roamed wild without “helicopter parents.” My mom and dad could be rightly called “zeppelin” parents: they were always far away, moved slowly, and I have vivid memories of them exploding all over my sister and me when things went wrong.

In this recurring nightmare, the department store was locked up; I could not get out, there was no way for me to phone home, and when the workmen started coming around, I hid among the mannequins. 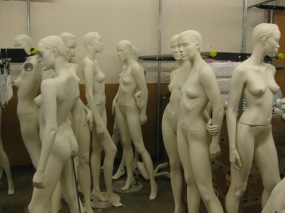 The workmen are so convinced by my mannequin-like acting that they bring me into… the back room, where mannequins are disassembled and reassembled and set back out on the sales floor.

As you have no doubt guessed, my nightmare was that I was put on display… as a girl.

If you aren’t already aware that this stems from an actual experience in my acting and modeling career, I’ll ask you to catch up to the rest of the class.

And if you know that my summer job in college was to work at a department store, let me reveal to you how nervous I was that very first time I stepped into “the back room.”

I met a girl there, a cashier who came to mind today as the theme from “Flashdance” played on an 80’s radio station. That was our first date, and our last. I wanted to hold hands and watch the movie, she wanted to make out… and she was getting a vibe from me that she later described as feeling that I was “a… friend.” The reason for her pause eluded me for years, but I heard it again, and again.

I was a late bloomer. I didn’t have sex until I was a senior in college. And before that, I was frustrated at why every girl wanted me to be her friend and nothing more.

One woman was so bold as to ask me, more than once, “are you sure you’re not gay? Perhaps you were abused and you’re not ready to talk about it?”

She later went around telling friends her theories. Gee, thanks. Buhbye.

Yet another said, no doubt in her mind: “I’ve figured you out: you want to be the woman!” Karen was aggressive, assertive, and never for a moment let me doubt she was in charge of our relationship. She told another female friend of mine what she thought of me, and when asked if this was true — there was no word for transgender in 1994 — I denied it. I realize now that I did that because I didn’t want to be what I was.

That was the year I dressed up as a woman for Halloween, a little too convincingly, I was told. At age 30, fifteen years after modeling as a girl, I still had that uncanny ability to appear to be female.

It bothered me and intrigued me, and yet I wrote off the experience as a one-off; been there, done that. Moving on!

And now more than two decades later, I am living a life that is not a disguise or a Halloween get-up. It is my every day experience. I don’t have any “confusion” about my gender, or my expression of it.

Even in the months when I resumed a male presentation for the world to see, I maintained my legal name and gender as “Dawn”, and kept the F on my drivers license. I never even changed the picture. And within a few weeks of once again presenting as a male, I felt compelled to resume HRT, to rebalance my hormones and resume — at least part-time — living according to the gender I had somehow forgotten I truly was.

I did that until I felt strong enough to do it right, all the time.

The love of my life is one of those people who used to say “back and forth, more than anyone, and yet today this woman I married said something else, which is why I wrote this.

“You didn’t change genders three times,” she told me, her beautiful brown eyes like chocolate melting in the quiet afternoon sunlight that filled what was our bedroom.

“You changed once — no, even that’s not right. I realize now you were never really a male. Maybe physically, for awhile. But never,” pointing to her head, “up here. Where it counts.”

I’ll admit, my transition is hardly the traditional path. It’s nothing like anyone else’s that I’ve found. And being unique is both cool and lonely. But the one thing so many of us Male-to-Female transgender people have in common: being who we are means no longer being loved by those who learn we’re not who we were.

On this point, there is no “going back.”

So we go forth, into the unknown.

Add your voice and make Democracy work for all...