The sci-fi franchise goes where no gays have gone before. 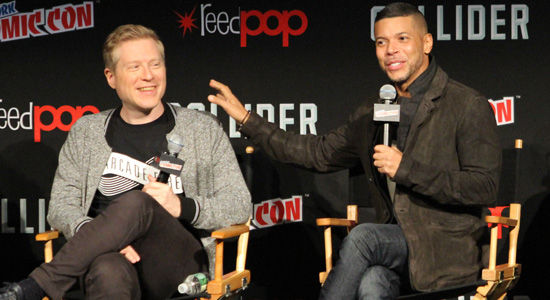 This is in part a repost of my article first published on the LGBT silo of nbcnews.com on October 13, 2017.

This blogpost includes original content not included with the article on NBC Out, and here appears in bold.

The fact that for the first time in the 51-year history of “Star Trek,” out gay actors are playing gay characters in love, is not something CBS, its stars or its creators are either hiding or promoting. But it is something they’re celebrating.

“I couldn’t be more proud to be a part of ‘Star Trek’ TV’s first gay couple,” actor Anthony Rapp of “Rent” fame told NBC News. “I can’t say how much that means to me personally as a fan of the series and as a member of the LGBT community.”

Rapp plays the prickly, grumpy genius anastromycologist Lt. Paul Stamets, which basically means he’s the foremost expert on fungus. And fungus gets far more screen-time than his same-sex relationship on the CBS All Access streaming show, which is just fine with Rapp.

“I’m proud of the fact that none of that really matters in the show,” Rapp said, describing the portrayal of their relationship as “alive, truthful and human.”

His on-screen partner and costar, Wilson Cruz, who plays Dr. Hugh Culber, called Rapp his “space boo” on stage at New York Comic Con. They’ve been friends since they starred together on Broadway two decades ago. “We’ve worked together for 20 years, so it was so easy to create this together, because we have so much back history.”

Cruz won applause during the evening event at the Paley Center for Media in midtown Manhattan, when he spoke up for transgender rights, called out violence based on gender identity and called for more LGBTQ representation in entertainment. “These stories we tell are really important, so that people understand who we are, what our lives are like, and perhaps they will understand us and not hate us.”

Cruz was quick to denounce the actions of the Trump administration to rollback LGBT rights and attempts to erase protections against discrimination.

“I’m livid,” Cruz told me before Saturday night’s panel at the Paley Center. “We have a president who cares very little for LGBT people,” he said. “His words mean nothing and his actions mean everything, and he’s saying everything he really believes in his actions.”

“It saddens me that this continues to be the case,” Rapp told me, saying despite the government’s actions, he remains encouraged. “The backlash that comes is only possible because of the progress. So it is in direct opposition to progress. It’s like the last gasp.”

The “Star Trek” franchise, said actor Jason Isaacs, is inclusive of “all genders, all sexualities, all flavors, not just of humans, but in our show of [other] species as well. The point being, things we are told should separate us, actually unite us.”

“The original series was borne out of troubled times, “ Isaacs continued, ”the birth of the civil rights movement and feminism, and I think there’s never been a time where a story like this, with a positive view of the future — even though we’re at war in the show — has been more necessary, than when division is being sown by some really toxic elements.”

President Trump and his Justice Department’s newly announced policies threatening LGBT rights, and the administration’s continued efforts to curtail reproductive rights and threats to immigrants, were as talked about on the red carpet as were the Discovery’s groundbreaking spore drive, Vulcans and Klingons.

“We’re not value-neutral when it comes to the issues of people being isolated, separated, not understood, ostracized,” Goldsman explained.

Citing proof of the show’s inclusivity, Alex Kurtzman, also an executive producer on the series, said the team behind the scenes is an even mix of men and women. He also revealed the show’s producers decided a refocus was necessary following President Trump’s unexpected election victory. That included a not-accidental nod to Trump’s “Make America Great Again” slogan, by giving the show’s antagonists, the Klingons, a new rallying cry: “Remain Klingon.” 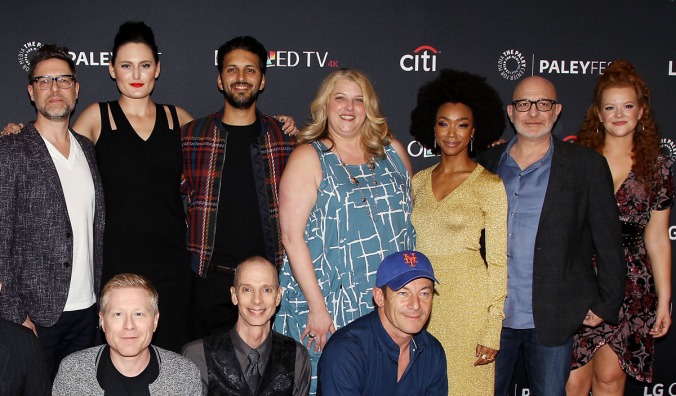 Cruz was swift to point out that from sexual harassment of women to racial inclusion, Hollywood has a lot more work to do, especially from his perspective as an industry trailblazer. He was the first out Latino actor on network television, playing the first openly gay teenager on TV: the character of Rickie Vasquez on “My So-Called Life” in the mid-1990s. Times have changed, Cruz said.

“But the fact of the matter is,” he told fans, “most of the LGBTQ characters now on TV are still gay white men. The work that needs to be done now is to diversify the picture of LGBTQ people, so that people can see that we come from all races, different genders, we have trans people.” Cruz’s character on the U.S.S. Discovery is only the second regular “Star Trek” character of Latinix heritage, following the half-Klingon, half-human B’elanna Torres played by Rosario Dawson on “Star Trek: Voyager.”

As gay actors, Cruz and Rapp have tremendous allies both on the screen and in front of it, largely thanks to social media. “Star Trek: Discovery” is the first installment of the franchise since the creation of Twitter and Facebook.

“The ‘Trek’ community is so profoundly engaged,” Rapp said. “We’re all in this together. Yes, I’m the one in the show, and you’re the one consuming the show. But we all care about it, and we get to share in that.”

Although CBS boasts the show has boosted subscriptions to its streaming service, a lot of the online chatter is centered on criticism of the network’s decision to hide it behind a paywall. Isaacs, who plays Discovery’s sexy, mysterious and mercurial Captain Gabriel Lorca, told Comic Con fans that controversy is not something the cast wants to address, and directed the question to “the other end of the panel.”

Executive producer Kurtzman took the bull by the horns, and didn’t mince words. He told fans paid content is where television is going, following in the footsteps of Netflix, Hulu, now Disney, and of course the pay TV granddaddy, HBO.

Another topic of internet speculation concerns Mary Wiseman’s character, Cadet Sylvia Tilly. Is she more than just a talkative space rookie, perhaps someone on the autism spectrum?

“In terms of the script, no one’s put a label on it,” Wiseman told NBC. “I think the idea that someone would see Tilly and recognize part of themselves in that performance, or that they would feel represented, is deeply moving to me, and gratifying.”

Series star, the stunning Sonequa Martin-Green who rose to fame in The Walking Dead, told us her favorite part of playing mutineer Michael Burnham is her character’s desire to better understand other people. 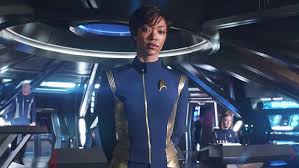 “I’m on a journey of self-discovery and I have an issue of arrested development because of what I’ve gone through,” she said, alluding to the challenges no woman in the franchise’s history has ever tackled: Burnham is an orphan raised on Vulcan as an adopted member of Spock’s family. Her actions set in motion the war between the Federation and the Klingons.

Speaking of Klingons, Mary Chieffo plays the imposing L’Rell, a character she describes as more than just intimidating; the six-foot-tall beauty revealed L’Rell has a quality Star Trek fans have never before seen in a Klingon: vulnerability. 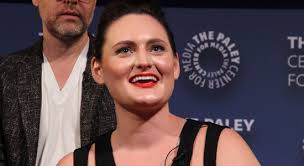 “I really hope,” she said, “whether it be LGBTQ, or anyone who sees themselves as ‘other,’ is able to relate to the Klingons, to L’Rell. I think there’s a lot there that I relate to, as someone who’s never felt quite in the vein of what other people wanted me to be.”

Just as Rapp and Cruz hope to convey their humanity in their performances, Chieffo said she, Martin-Green and Wiseman aim to be strong female role models for girls.

Want more? Watch the videos from my Facebook Live stream by clicking these links!

Thanks to CBS, startrek.com and justjared.com for the photos appearing here.

Special thanks to New York Comic Con and the Paley Center for Media for welcoming me to cover these two events for my readers here and at NBC News!