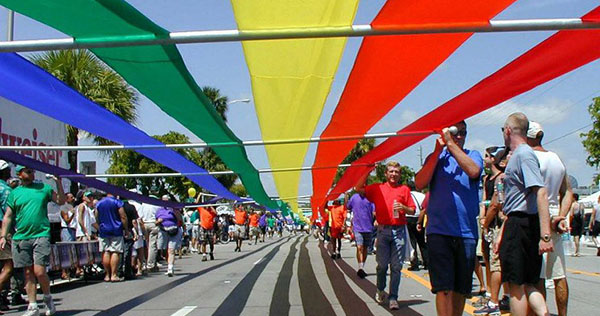 It’s June, which in the U.S. and countries around the world, is the month lesbians, gays, bisexuals, transgender and queer-identifying individuals celebrate our love, our authenticity, our existence and our right to be who we really are.

To work as we really are.

To live where we wish.

To love who we love.

I asked my neighbors in West Hartford, Connecticut what gives them Pride. The answers were uplifting, and I had to shake my head at the relative few who decided to not respond when asked the question. Thankfully, I found many people were happy to participate, including another mom I haven’t seen in a decade. My best wishes to her family, who like mine is celebrating a rite of passage this Spring: High School Graduation!

Sunday is Father’s Day, and yes I do celebrate that day with my kiddos. I may do the job of mom, but I’ll always be their dad.

Also this month, we mark a more solemn occasion as we remember 49 people who lost their lives because of hate.

I ask that each of us direct our energy to the cause of ending this kind of violence, unspeakable tragedy and outright hatred.

For decades, hate has been directed at an organization that provides essential healthcare services to millions of Americans, mostly women but not just women. This group, through its chapters nationwide, provides abortions — but not just abortions.

As organizing and training specialist Patrick Comerford explains in this month’s episode of RiseUP with Dawn Ennis, Planned Parenthood’s doctors, nurses and counselors devote about 3 percent of their time, energy and effort to the legal and safe practice of abortion.

The other 97 percent of Planned Parenthood’s mission is to provide comprehensive healthcare, counseling and medical services to patients. In fact, Planned Parenthood is the number one provider of healthcare to transgender men and women and gender nonconforming individuals.

But many of our leaders in Washington and our friends in the conservative movement want nothing less than to choke the life out of Planned Parenthood, to slash its funding and leave those who rely on its essential services no choice in their healthcare but Christian-run facilities.

Comerford, the first gay man I’ve welcomed to my show, talked about how he sought out Planned Parenthood as a young man, determined to be sexually active before coming out to his parents.

His mission on behalf of this institution is to raise awareness of our political process and how people can get involved in their communities, in their governments and, as I like to say, RiseUP. You’ll find links below to help you do just that.

This month’s special correspondent is award-winning blogger and Houston native Monica Roberts. A pioneer and living legend in the transgender community, she is a firebrand, a force to be reckoned with in the state legislature, as well as a proud Texan.

Her blog, Transgriot, reminds us that June 12th marked not only one year since the massacre at Pulse in Orlando, FL,  but also the 50th anniversary of the Loving v. Virginia decision by the U.S. Supreme Court, which outlawed bans against interracial marriage.

In a few days we will be remembering the two-year anniversary of the high court’s ruling on marriage equality. And Roberts is in the midst of what is shaping up to be a real dogfight, a legal battle over trans rights on her home turf: Texas Gov. Greg Abbott has called a special session of the Legislature to decide where transgender students can go to the bathroom.

Read more about that fight and you’ll find other items Roberts and Comerford mentioned, below the link to the show via YouTube. West Hartford viewers can watch RiseUP on WHC-TV Channel 5 beginning Friday June 16 at 9 p.m..

Here are some of the links Pat Comerford mentioned in the show to help you get involved in local politics here in Connecticut:

EqualityCT.org is the site for Connecticut Equality.

PlannedParenthoodVotes.org is the site for Planned Parenthood of Southern New England

CGACt.gov is the site for the Connecticut General Assembly.

And you’ll find the national Planned Parenthood organization is here.

Monica Roberts outlined what’s at stake in the Texas special session here on her blog.

My colleague Jeff Taylor who covers state legislative actions at LGBTQ Nation has this report on the special session in Austin that I think you’ll find very informative.

And you can read about the 12 transgender victims of murder in 2017, a sad list which Roberts referred to, here, written with sensitivity and thoroughness by my LGBTQ Nation colleague Erin Rook, a transgender man.

Next month, we’ll be joined by Connecticut State Senator Terry Gerratana and my next special correspondent, Ernest Owens of Philadelphia, the award-winning out gay journalist.

Thank you for watching and please keep sharing and sending me your comments!

A special shoutout to one of the wonderful young women who helps me bring RiseUP to you every month: director Meredith West (left) is leaving Diana Chin and WHC-TV — and me — and moving to Atlanta for a new challenge. She will be missed! We wish her well.