Fool me once, shame on you.

Fool me again, shame on me.

That little ditty has been running through my head as I have learned — the hard way — the price of being authentic. Of expressing my opinion. Of trusting the universe will allow me to be without slapping me back down. Shame on me for thinking I can have all those things.

Just two people reached out to me this week, among the hundreds who read and responded to a recent opinion piece I wrote for The Advocate Magazine, offering to help me better understand a situation with which I am somewhat familiar, but not intimately nor with any personal experience; that of the detention of undocumented immigrants who are transgender.

That actually was not the subject I set out to write about, but for the central figure in the story and her supporters, it’s all that matters. What Jennicet Gutiérrez and her story represent is something that I have spent some time considering these last couple days. 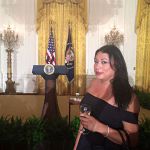 I did so, not because hundreds of mean people in their pajamas trash-talked me on Twitter, or because fringe “journalists” denounced my point of view as “privileged” and “classist.”

I did it because I enjoy learning things, especially when it’s something I don’t know well enough.

I took time to better acquaint myself with the views of people I respect, who were kind enough to constructively criticize my opinion without doing to me what I accused Gutiérrez of doing to the president.

What I wrote about was respect. I went so far as to call Gutiérrez rude. My point was to discuss civility, not activism or rape or race or the immigration status of any individual.

But no matter how many times I echoed the comments of others in praising Gutiérrez for achieving a policy change and for standing-up, no matter how I denounced those who booed her, all my detractors saw was me “shaming” or “shitting on” a trans Latina woman, and judging me “on the color of my skin,” and not “on the content of my character,” to quote Rev. Dr. Martin Luther King.

One “friend” saw an opportunity to drag my name through the media mud once more: she misquoted me, mocked and dishonored the memory of my grandmother and aunt in suggesting they and all Irish immigrants were liars, and took me to the woodshed in a rival publication which someone I respect and admire once described as “one step below writing for al Qaeda.”

Well, friends and followers, I’m not going to flip-flop, or print a retraction, or apologize — my response tweet Wednesday basically said it wasn’t my intention to offend anyone, and I’m sorry that anyone took offense about anything I wrote — but, well, that’s the nature of opinion writing. Or as my grandfather said, “that’s why we have horse racing.” Because we all have opinions that lead us to think we’re right and the other guy is wrong.

But to those who blasted me for putting my preference for showing manners ahead of her cause, for spotlighting what Gutiérrez did in the context of civility, and for deploring the disrespect she showed the president — for putting those things ahead of the need for action and for change, I’ve got a message for you:

I’ve pondered, read, watched, listened and listened some more to trans, gay, bi, lesbian (LGBT), people of color (POC), white allies, and cis queer women, who instead of spitting at me online shared with me some of the experiences they and people they know have endured. I learned how bisexuals were once again the victims of erasure and shook my head in disgust at those who blasted Gutiérrez for being undocumented, as if that invalidated her opinion.

I even considered the position of someone who is a vicious bigot herself, giving grief to people who don’t match her standards, who demanded I unfriend her on Facebook because of my opinion piece (by the way, who does that? Why not just unfriend me? Oh, right; if you do that, then you lose influence over the people I connect you to in my vast media universe. Ah.).

Well, I must admit, she’s right when she says Jennicet Gutiérrez is brave. I’m sure Gutiérrez is also compassionate and I’ll agree she is beautiful. There is no doubt in my mind she is selfless and I trust those who know her who have told me she is a good person.

The only area where this woman on Facebook and I disagree (not counting this woman’s derogatory opinion of late transitioners) is that she said Gutiérrez “asked the president.”

She did what Sylvia Rivera and countless activists and civil rights leaders and everyday people have done when given an opportunity: she stepped up and challenged authority. She stood up for those who have no voice. She spoke truth to power. She grabbed the spotlight away from the president to shove it — not on herself — but toward those who only want two things: to become American citizens and live authentically without fear or retribution or danger.

And I’m certain what Gutiérrez did provoked change that would not have happened otherwise. For that she deserves our praise and all the credit, and those who booed her should be ashamed of themselves, because in booing Jennicet they booed all trans people. I said as much in my Op Ed. I never called for Gutiérrez to be silent, nor silenced, but in focusing on the disrespect I believe now I did Gutiérrez an injustice, by not recognizing that for someone like her, there appeared to be no other opportunity. If you favor sports analogies, this was her shot, her one and only shot, and she took it. Or maybe that’s a sniper’s analogy, but either way, she took it.

And I will concede her doing so frankly makes me uncomfortable, because of my own history. That’s why what I wrote is my opinion, because it’s based on who I am.

I was raised to mind my manners and to respect authority, to work within the system, to network among those with similar backgrounds and to use the proper channels for communication and in addressing authority figures and institutions. To my parents, protesters were “hippies,” radicals, undesirable.

Challenging authority in my house was met with a beltstrap, a spanking, a slap across the face. I was taught to turn the other cheek, and that to cry or to complain was to be weak.

I was raised to be obsequious, with white privilege and upper middle class privilege and male privilege.  I have been reminded of all this recently, very much so, to the point at which I am humbled to now say: I believe rude was right, in this circumstance.

Despite my habit of being snarky and having a smart mouth, I failed to rebel as a youth, and bring that perspective to my adult life. As a parent myself, I have distilled the strict disciplines of my birth family to become more forgiving in the family I raise, to be more loving, more considerate, more patient and more accepting of ways that are different. I have been an active participant in my unions and have used my skills as a journalist to bring truth to light and expose the excesses of power and corruption. I’ve been arrested, seen the inside of a jail cell, had my days in court, and I’ve endured misgendering.

And I’ve educated myself further over the past 48 hours, reading up, opening my eyes to better understand and appreciate and truly listen to those who are willing to take time to share experiences, without casting aspersions. So I can now say: my opinion on Jennicet Gutiérrez evolved.

I consider opinion and thought to be different things. To me, thought is a process, an evolution of ideas; opinion is the result of that process, but it is not an end product unto itself, because thought continues. And so opinion can evolve as well, given more information and perspective.

Thanks go out to my friends who are like-minded on the topic of civility, as well as to those whose opinions contrast with mine — who gave me the impetus to grow rather than denouncing me as a heretic, for having a contrary view.

I will not back down from my position — that it’s usually best to show respect and manners — and I don’t write this to win converts. I am still a believer in doing whatever your conscience tells you is the right thing, and I am one who tries to walk that line on the side of civility.

But I will concede I could have done a better job expressing there are always exceptions and extenuating circumstances.

I am a reasonable enough person to admit, as much as I wish she didn’t have to, Gutiérrez did the right thing in seizing what she saw as her only opportunity, no matter the cost to herself or to respectability. Making change is a dirty business, and it takes someone willing to get her hands dirty or her name sullied to make a difference. I am proud of Gutiérrez, and can say without exception that I support her actions that day.

With respect to those who won’t see my statement as anything other than eating crow, well, that’s your opinion. The difference between us is, I will respect yours.

I send you wishes of peace and solidarity for LGBT people everywhere — and for all kinds of people, everywhere — from the City of Brotherly and Sisterly Love.